Looks like Sky News could have some coverage for us soon hopefully.
I started a new thread on this as its getting hard to keep up with the News Tidbits thread in my opinion.
Top

The conference will be shown on ITN's 1:30 news bulletin

Thanks to mi6.co.uk for the tip!

I know the new title of the Bond 22! It was announced on MSN today.

It's Quantum of Solace!

Hope this helps but hope to see the conference online!


By Mike Collett-White Reuters - 56 minutes agoLONDON (Reuters) - New James Bond film "Quantum of Solace" sees the super spy out for revenge on a mission that takes him to Austria, Italy and South America.

(Advertisement)
Actor Daniel Craig, the first blonde Bond, reprises his role as 007, after critics and cinema-goers hailed his debut.

First details of the 22nd instalment in the Bond franchise were unveiled on Thursday at Pinewood Studios outside London.

According to the synopsis, Bond girl Camille, played by Ukrainian-born Olga Kurylenko, leads the secret agent to Dominic Greene, member of a mysterious organisation and a ruthless businessman, seeking to control huge natural resources.

Greene is played by Frenchman Mathieu Amalric, who starred in the Oscar-nominated "The Diving Bell and the Butterfly".

The plot follows on directly from "Casino Royale", as Bond aims to uncover the truth about Vesper, the beauty who betrayed him, and discovers that she had been blackmailed.

"James Bond is after revenge, and Camille is after revenge & They have slightly different goals, but in the end they are going to have to collaborate," Kurylenko told reporters.

On a tour of the main Bond set at Pinewood, journalists were shown 3 stages, all of them set in the Italian city of Siena.

In the largest, two actors including Craig's stunt double, swung from ropes and fought in an old art gallery.

Well, I'll make the best of it. Maybe it's not too soon to start looking for a nick name, yah? 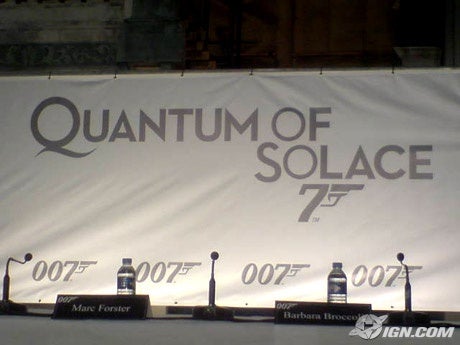 UK, January 24, 2008 - IGN has been at Pinewood Studios (outside London) today on the set of the new James Bond film, and, rather excitingly, we've learnt the title of the new film!

Bond 22 will OFFICIALLY be called.... Quantum of Solace.

But why that title? Well, it comes from a short story by Bond author Ian Fleming that appeared in the 'For Your Eyes Only' collection of short stories about the English secret agent.

It revolves around a boring dinner party attended by 007 where he strikes up conversation with the elderly governor of the Bahamas. He tells Bond a story about a tragic relationship between a former civil servant and an air hostess that ends in bitter divorce. Apparently the story gets Bond thinking about his own life - and makes him realise his own adventures often do not compare to the real drama of everyday human life.


What do you think of Bond's new title?

As well as the title, we also heard some more about the plot. Apparently it will pick up from when Casino Royale left off, and begin with Bond and M interrogating suspects who reveal the shadowy organization who blackmailed Vesper.

An MI6 traitor leads Bond to Haiti, where he meets Bond girls Gemma Arterton and Olga Kurylenko, who introduce him to ruthless business man, and the villain of the piece, Maurice Green (played by The Diving Bell And The Butterfly star Mathieu Amalric.)

Bond's mission takes him across Austria, Italy and into South America, where he uncovers Green's plan's to take control of one of the world's major natural resources.

But how does the titular short story go with the plot? We're not sure, but it does seem to indicate the screenwriters have continued where Casino Royal left off in introducing more character-driven and grown-up elements to the series.

But we still don't think the film will become an introspective art movie, as producer Andrew Wilson also told us: "It will have much more action compared to the last film, probably twice as much."

We also heard that Bond girl Gemma Arterton will "get to kiss bond", that Vesper "will certainly be on Bond's mind" - but Eve Green won't appear in flashbacks - and that the film will continue to explore the relationship between 007 and M, played by Dame Judi Dench, and include some typically fractious banter between the two.

We'll give you more information as and when we have it, as well as a full, action-packed set report tomorrow. So stay tuned to IGN Movies.

"I'm going to want to have sex right until the very end, thank you very much" - Daniel Craig
Top

http://news.bbc.co.uk/1/hi/entertainment/7206997.stm
The top notch acting in the Weisz/Craig/Spall 'Betrayal' is emotionally true, often v funny and its beautifully staged with filmic qualities..

i've posted the pix in a new thread

Are there any clips of the actual press conference anywhere yet?

Deb wrote:Are there any clips of the actual press conference anywhere yet?

but the vid is not loading. Everyone must be attempting to view it at the same time.
Crazy!
Top

Question, when I was watching the new video, I was this one dated from August 2007. How did someone know the new title then?

JoniJoni wrote:Question, when I was watching the new video, I was this one dated from August 2007. How did someone know the new title then?