It's a great pic but I am still not a fan of the moustache - sorry.

Too much hair on his face is akin to spraying graffitti all over the Mona Lisa imo. Why tamper with perfection? On the other hand, Daniel WITH moustache is 100 times better than any other man WITHOUT moustache. He has to be...

so no drinks yet. How was he single? Maybe not happy, but not single yet.

But yeah, one of his sexiest pics ever.
The top notch acting in the Weisz/Craig/Spall 'Betrayal' is emotionally true, often v funny and its beautifully staged with filmic qualities..

2nd one, nice choice. really like the style.
Top

Yes, he looked sooo fashionable in Italy. But I liked all the suits.
He wears them so well.
The top notch acting in the Weisz/Craig/Spall 'Betrayal' is emotionally true, often v funny and its beautifully staged with filmic qualities..

How can a man in a suit look just as good.

This is a bit small but perfectly formed...

THAT is perfection. Had some doesn't get any better than that.
His poppy leaf turned to the wrong position.
Top 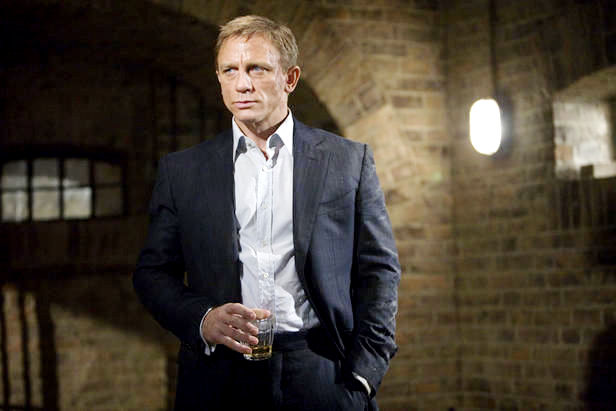 The day before Christie's online bidding ended, that martini shaker and the 2 glasses were up to $10,000. I don't know what it closed at, but likely significantly higher because it was too soon for a bidding war. His holster was up to $15,000. I took a couple screenshots, but they are on my other phone bill have to look.

But SDK, how could you?????????? How could you take away that shirtless, necked under the wrapped towel Avi???? One of the hottest shots from Skyfall. That BODY! We were so robbed in Spectre. In the States, there is this movement called 'Black Lives Matter' that resulted from a number of African American males being killed by police, unjustifiably so by many (taser but don't shoot, etc. There are protests and a mounting social awareness of injustices against that segment of the population (boycotting the Oscars, for one.). WELL, I say 'Daniel's Body Matters''!!!!! We needed protestors outside the cinemas chanting that and wearing t-shirts printed with your other avi. I hope it's not too late for one last Bond shirtless scene. I'D be a lot more pro-Bond if I knew he would give us some muscles to drool over.
Top

It is rare that a man has BOTH... a man can have an amazing body but have a face like a smacked arse.... look at someone like Jean Claude Van Damme for example... (or rather, DON'T look at him!

)
A Naked Daniel is never to be ignored or under-appreciated, I agree. But I said on my blog that having Naked Daniel as an avi was like trying to constantly achieve an orgasm. Sometimes, that is quite exhausting. I get exhausted just thinking about it.